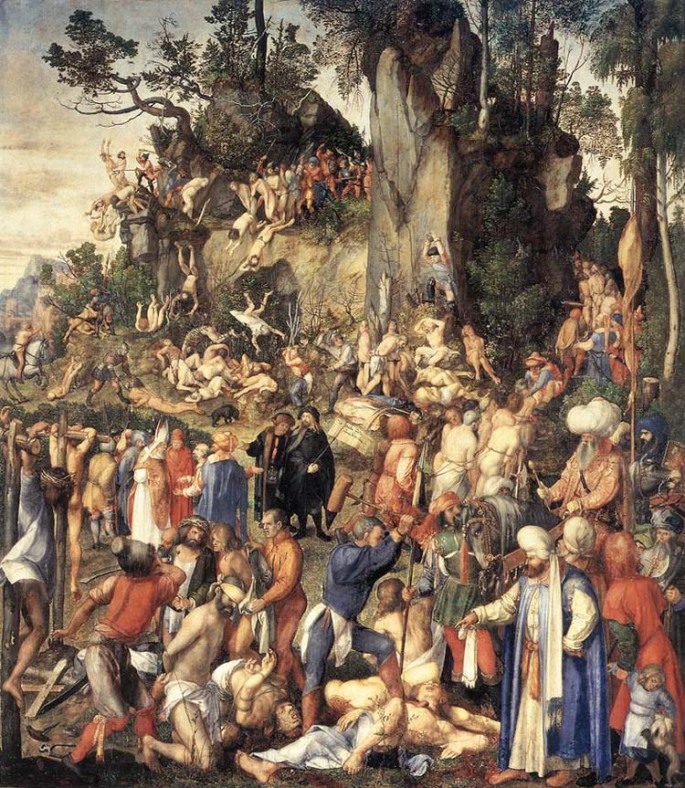 DÜRER, Albrecht. The Martyrdom of the Ten Thousand. 1508. Oil on canvas transferred from panel, 99 x 87 cm. Kunsthistorisches Museum, Vienna. Downloaded with express permission from the Web Gallery of Art at http://www.wga.hu from site admin Emil Kren, Ph.D.. Many thanks.

Quote “This morning’s issue of The Philippine Star had a particularly alarming headline: “RP DROPPED FROM LIST OF WORLD DEMOCRACIES. Killings blamed for downgrade to partly free.” This, of course, would cause any sane Filipino who cares (sic) about the state of the country feel (sic) a reasonable amount of concern. But knowing better than to just trust any headline, I read through the article and found out that the news, though most definitely disturbing, was deceptively single-sourced.

Quote “The source of this jaw-dropper of a headline is a survey made by one private New York-based organization called Freedom House. The said organization, though deemed credible by some political research groups, has been repeatedly criticized for being an organization known to be predominantly funded by the U.S. Government, and thus face (sic) allegations of furthering the said government’s interests. The organization’s methodology itself is questioned by some social scientists, among the more notable critiques include Herman and Chomsky’s Manufacturing Consent (Pantheon, 1988) and K. Bollen’s Political Rights and Political Liberties in Nations: An Evaluation of Human Rights Measures, 1950-1984 (Univ. of Pennsylvania Press, 1992).

Quote “Now, I am not saying that Freedom House is a completely biased organization that should be trusted. What I am attempting to say is that no matter how credible a source may seem, the fact that single-sourced articles should never be allowed to see print remains a tenet in any form of news reporting. The reason for which is that there should always be room to doubt or question any one source, which grants people the freedom to form their own opinions. Citing Part 3, Number 2 of the PPI Code of Professional and Ethical Conduct, “single-sourced stories must be avoided as a rule” so as to “ascertain the truth of our sources’ assertions.”

Quote ”The Philippine Star should be more wary of what they place on their front page. We all know terribly disturbing news sells, but we should also know to offer our readers different points of view in order to give them the power to judge the gravity of any given situation. Jan 17, 2:09 PM”. Closed-quote.