tap the “play arrow” of the soundcloud pod below (if on mobile device, click “Listen in browser” on the audio pod) to play the theme…

The U.P. Student Council chair and other “student leaders” who are members of the Upsilon fraternity issued statements yesterday afternoon “condemning” a group chat leaked online that morning. An anonymous twitter user “100Upsilon” embedded and tweeted downloaded files of what appeared to be screenshots of the group conversations containing profiles of certain members of the Upsilon in the Google Chat app which contained, among others, the following texts by those with profiles in the group chat (they are named in one screenshot because of contributions in ticket sales they owed the fraternity). The group chat covered conversations from September to October 2018. They were never denied by the fraternity.

(the profanities in the vernacular are paraphrased here), : 1.That the Lumad communities and Mindanao should be bombed off the face of the earth, that if soap was made for washing, bombs were created to cleanse Mindanao; 2.That “to be fair” the Lumads should be killed; 3.Naming the female leader of STAND-UP, a progressive student political party, and saying that she looked like a pig with whom a beggar had sexual intercourse (in the vernacular) with; 4.That Cory Aquino, a mere housewife should not have been President (profanities heaped on her), her husband was an Upsilonian and she went insane on the death of her husband only because she had lost the genitalia (in the vernacular) of an Upsilonian; 6. Naming a U.P. medical student (critical of them) and heaping profanities and violent threats on him and on Muslims; that the Upsilon brods will impregnate all the mothers of the Muslims so that they could kill their fetuses; 7.That the frat should have another Atio (referring to the UST student who was killed by a frat) to teach activists a lesson; 8.In reference to the U.P. Manila female student activist named Jo who was killed last year, that they do not want to be in a poster beside her; 9.In reference to a mountaineer-applicant who died after a 6-kilometer run, that he was a “weaks_ _t”; 10.That the leading female student leader of the U.P. student council (also named) was so fat that she joined a certain sorority (named) so that she could be prettified; 11.That the members of the Portia sorority, the DLS sorority, and other females like Risa Hontiveros were dumb (in the vernacular);  13. That they should  leave their seminal fluids (in the vernacular) inside these women and thereafter punch them in their bellies to smash their uterus so they would not get pregnant; 14. Naming student leaders who were gay and heaping vulgarities against them, that they would pretend to rape a certain gay student leader so that their other brods could come to the rescue and look like heroes but that it would not work because the gay student leader would want to be raped;  and other profanities and threats of violence.

Amber Quiban takes the stage to address the audience. https://t.co/VogBA7el0D

at the moment… HAPPENING NOW AT THE PARKING LOT IN FRONT OF THE ARTS AND SCIENCES BUILDING: Ongoing spontaneous protest of students (organized last night) against unabated fraternity-related violence on-campus and online

tap the play arrow or the box “Listen in browser”:

(photos rightclicked from the twitter site of the U.P. Student Council) 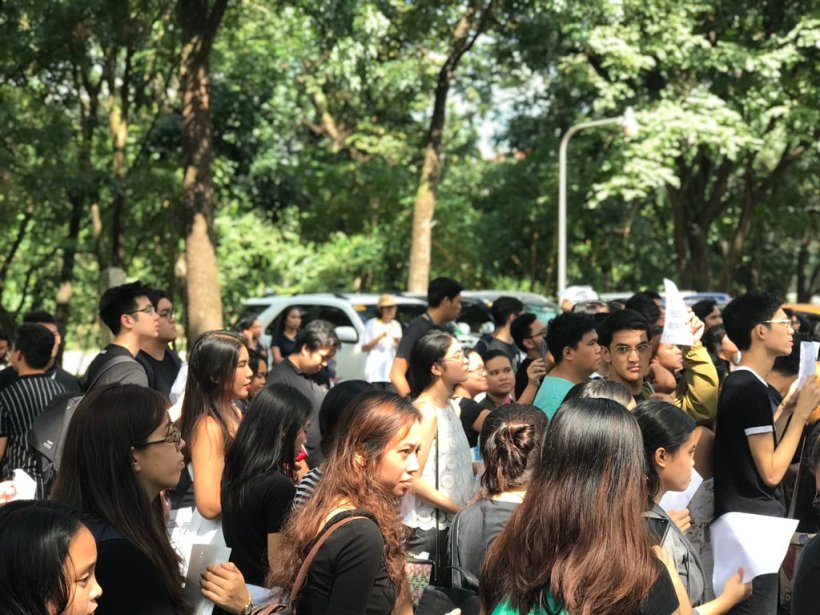 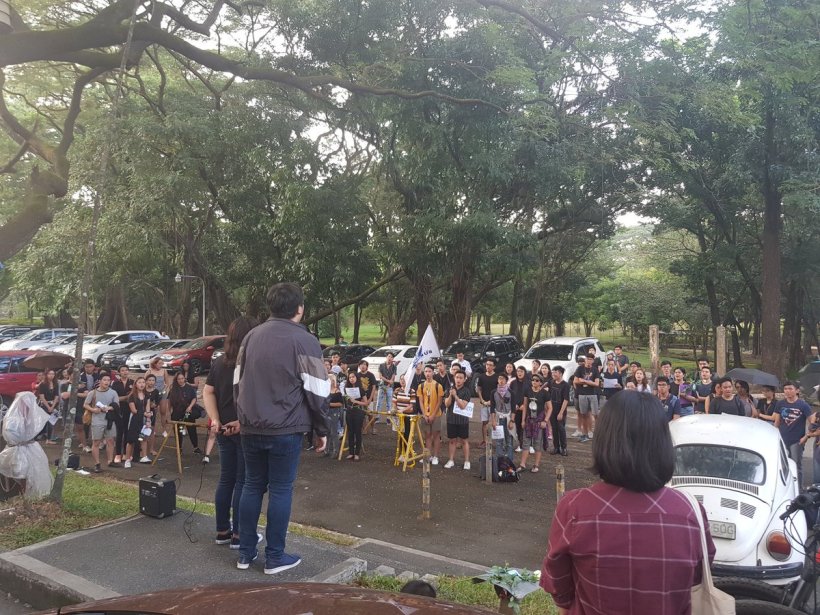 Statement of the U.P. Law Portia Sorority on the death threats & profanities hurled at Lumads, student leader-activists, women, Muslims, gay people, by Upsilon fratmen in their Google Chat conversations Sept-Oct 2018 (Statement jpeg rightclicked from the sites of the U.P. Portia Sorority of the University of the Philippines College of Law)

(jpeg of statement embedded below)