UPDATED: Very good suggestion from Bayan Muna on how to geographically fast-track distribution of cash subsidy of P5,000-P8,000 to households: Rep. Carlos Zarate did the math
The suggestion of Bayan Muna Rep. Carlos Zarate is, quite coincidentally, very compatible with the exhortation of IATF CabSec Karlo Nograles that those who have enough savings and can afford to buy their daily sustenance should no longer receive the cash subsidy/ food subsidy under the Bayanihan Law and should refrain from lining up. Bayan Muna gave a very good suggestion on how to implement that:

Based on news reports and their own interviews, the DSWD is proceeding at snail’s pace (sobrang bagal, very, very slow) in distributing the food subsidy/cash subsidy to 18 million households.

Bayan Muna (through Congressman Carlos Zarate) did the math, upon which a map can be drawn up, and on which the Bayanihan Law demographics can be inputted:
Here it is (as quoted by Manila Bulletin a few hours ago, as retweeted by Neri Colmenares of the MB article and re-posted by ABS-CBN’s RG Cruz) : 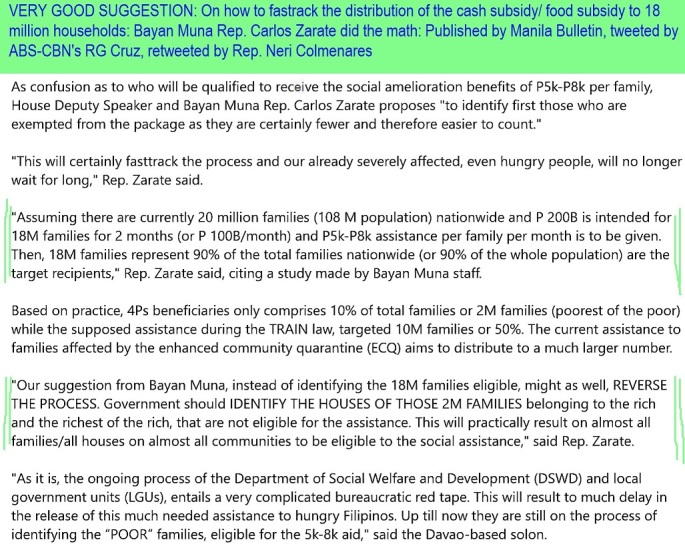 Let me laymanize this further.
For example:

In Quezon City, put an X on the areas that should no longer receive the food subsidy.

Put an X on the following: 1.Corinthian Garden area,

Based on this map, input the qualified demographics on the areas that were not X’ed (Informal sectors such as residents who are unemployed, who are no-work-no-pay residents, who are street vendors, pedicab drivers, etc.. IATF spokesperson CabSec Karlo Nograles extensively discussed this in an interview this morning at GMA7 News)

When you have completed the map and inputted the demographics, chart the schedule for each area.

Here is the further laymanization po of that:

Heads of household who belong to the following qualified demographics ____, _____, ____ etc.  with family names starting with Letter A  Bring the following IDs ____, ____ : Line up  from 7am to 10am, at _____ and receive the cash subsidy from  _____ (state name of official). (This would be better if you actually post the list of the names of qualified demographics to prevent fraud)

This could be done per small area.
1.Make a map, c/o Bayan Muna,
2.Sub-divide into smaller areas c/o Bayan Muna,
3.Input qualified demographics for each of the small areas, c/o DSWD or if DSWD is too busy, c/o Gang Badoy-Capati of RockEd/TOWNS and Joms of Gabriela, since the DSWD is proceeding very slowly,
4.In order to avoid a stampede: Further systematize the qualified demographics either by family names or date of birth in order to avoid a stampede, then assign dates and hours , and manner, c/o Bayan Muna or experienced registration and enrolment administrators-academics in UP Diliman (UP Diliman is experienced in systematizing queuing processes ). It would even be better to post in the area the LGU list of  names of residents who belong to the the qualified demographics to prevent fraud.
Based on this, make a time-motion study and give an estimate on how many days it would take to complete distribution, c/o Office of the Vice President and office of Rep. Neri Colmenares, with attribution on who made the maps, inputted the data, and the source of the LGU list of residents who belong to the qualified demographics. (If the IATF does not publish a transparent method by which the cash subsidies would be distributed, you can be sure whose pockets are going to be lined with the cash. PLEASE HWAG PO KURAKUTIN ANG PERA NG BAYAN NA PARA SA MAHIHIRAP. Is there a particular reason why the DSWD is not publishing the method by which the cash subsidies would be distributed to 18 million families beyond generalities such as “they can draw it from Landbank”. Publish the areas where the qualified demographics are, who they are, where and when each qualified family will get the cash subsidy. Outside of the PPPP Pantawid Program, the DSWD has not presented a detailed  plan of distribution  for the 18 million families that contains areas, classification and names of residents, dates and hours. Ano ba ang balak nyong gawin sa 275 bilyon pesos, DSWD?)